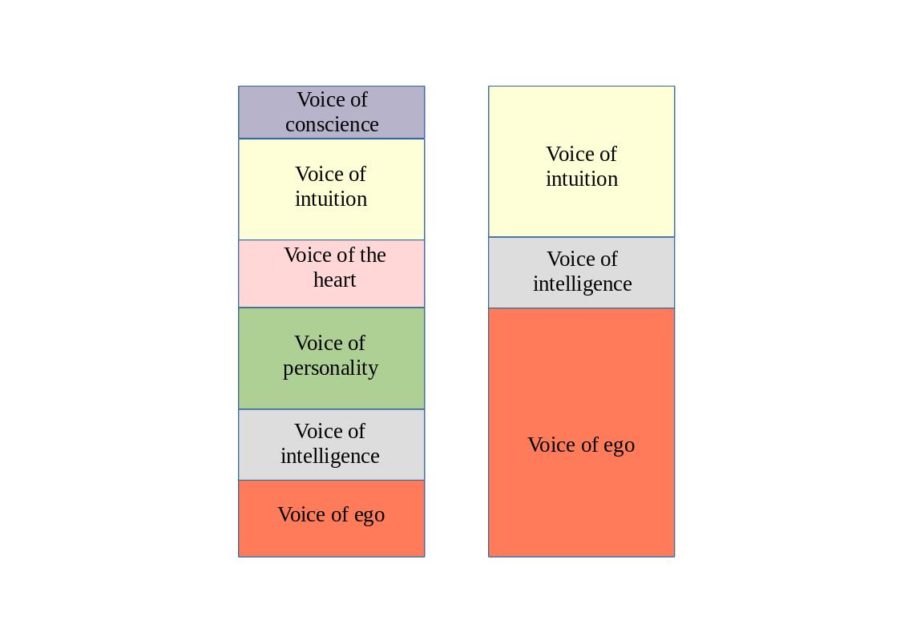 I wrote an article on the six voices that are part of our psyche.
I precise another time here – and blablabla – that I’m no professional of psychology, just a professional on energies.

As such, I’m convinced that these six voices (ego, cleverness, personality, heart, intuition, conscience) have a different importance for people, as a percentage in a statistical column.
For an equilibrated individual, they are all here and roughly, the more the voice of the heart is present, the more compassionate a person will be.

To sum it up, the more a person is negative, the more the ego has overtaken the place.

And to pass into the psychopath realm, the voice of intelligence is very strong and becomes Machiavellian.

With the selfish people, who don’t manipulate consciously, there is maybe some conscience and heart left, a tiny part of humanity that could get awakened in extreme situations.
But these have been completely cut off in the case of narcissists and psychopaths.

Two voices out of six that have totally disappeared!

And a third one two.

Because a manipulator – from -4 on my classification – has very few real personality traits left.
He just uses what works to get what he needs, this energy fuel he will only find in other people since he can’t create it himself without a heart and the emotions it generates.

A manipulator has no real personality left.
Only masks.

Thus, manipulators are people who only use three voices: ego, intuition and intelligence.
Do you understand how different they are from us, good, people, then?

There is no need to believe in conspiracy theories, like the one that believes lizards live among us: manipulators could as well come from another planet.
They only hide behind a skin and appearances that has them seem like us.

And I wonder, when I think about the numerous narcissistic people in my family, who they would have been, had they not been limited to the archetypal traits of their kind.

I thought for a long time that manipulators could wake up one day and be kind but I don’t believe that anymore.
A heart can’t grow back.
And if Dark Vader was truly the manipulator he seemed to be, seeing a son he had never watched grow up, being electrocuted, he would have felt absolutely nothing. Nor pinch in the absent heart region, nor awakening of a conscience.
Maybe a mild pleasure in the new attraction.

From -8, it’s my analysis that the psychopath has a very acute cleverness. A clear cleverness not muddied by a conscience that could bother pure logic.
This intelligence he knows he possesses further feeds his ego who didn’t need it.

And it’s my conviction that a person who wouldn’t be clever enough wouldn’t be able to reach this summit of evil. He would stick on the -7, counting on his gut to survive and thrive.
Which wouldn’t mean the intense narcissist, being -7, will be less dangerous than a -8 psychopath. Quite the contrary, because cleverness has the psychopath behave and hide when, in the absence of it, an intense narcissist won’t feel constrained.

Also, I’m convinced that in most cases, intuition is more powerful than cleverness. It’s the intuition we also call genius, this bright light of instant understanding that goes beyond logical steps to land directly on the conclusion.
It’s intuition that enables one to feel a situation right away and to know instinctively what to do.

It’s intuition that, powerful antenna, feels the vibrations of a crowd and knows how to adapt to it surf on it and make it his thing.
It’s intuition that creates speakers that can electrify people, hypnotise them, and it’s my impression that Adolf Hitler, for example, would find himself on the intense narcissistic range in my classification. He was considered as a clown by the German intellectual elite of the time. Who gravely underestimated him.

On the contrary, the cleverness of the -8, -9 or -10 is literally a straitjacket, that will prevent psychopaths from doing whatever goes through their mind, anything too obvious.
And will enable them to plot in the shadows.

When an intense narcissist, overwhelmed by his ego, unable to feel shame and listening to his intuition can also succeed.
Luck favours the bold.
And this, in the case of Trump, is what has thrown so many pundits in so much confusion: he succeeded in being elected, he must be clever!
How is it possible, then, that he behaves like an idiot?
Is this a very subtle way to play a three dimensional chess we wouldn’t understand?

These people who, in their majority, must have grounded their success on their diploma, overestimate the power of cleverness and underestimate intuition.
Donald Trump, on the contrary, is living proof that an idiot, protected from reality by his enormous ego, and who knows how to listen to his enormous guts, can become president.

Also a narcissist, relying on his instincts, less logically clever, won’t show his intelligence and thus will seem less arrogant.
Even simple.
And all this demagogues are a living paradox, when they pretend to be saving their country from the swamp, as in reality they only think about their own interest.

For some public figures, who have the absolute power to do as they please without consequences, you can even witness a incredible show of stupidity and craziness. What a relief it must be to show oneself without any constraint! What fun!
Hello there, Turkmenistan and North Korea…

But you shouldn’t, while you are amused by these clowns, forget that they are also dangerous.
They are more Joker or IT than birthday clowns.

All the more dangerous that their overinflated ego has them susceptible to the slightest criticism.
Balloons fear pins.
And comedians are the first, in dictatorships, to have to choose between exile and a cell.
Truth is the absolute enemy of the narcissist: he isn’t clever enough to play around it.

Whereas the psychopath, being a great actor, knows.
And he most certainly despises these rough narcissists.
More so in a democracy – the ones we have left – where the opinion of the electors still has value. Because there, a majority of people is still positive. And they vote, they consume…
A negative person has to pretend through marketing or public relations.

Narcissists or psychopaths, there are too many of these profiles living without heart, conscience or real personality as you climb to the summit of power.
The more you’ll climb, the less oxygen you’ll find.

And it’s past time we had complete humans to lead us.